Is The Boston Globe’s Joan Vennochi Too Lazy To Read Her Own Story Or Simply A Pawn For Privatization? 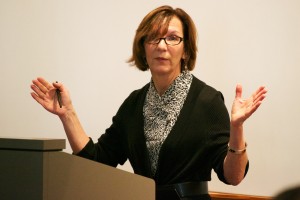 Last Friday, Boston Globe columnist, Joan Vennochi, wrote a column titled: “Labor’s hot rhetoric grows cool without facts.” Judging by the title of her column, the only one light on facts appears to be Joan Vennochi herself.

As for why labor would attack the Pioneer Institute, the better question is why wouldn’t they? The Pioneer Institute doesn’t care about telling the truth. Despite historic snow falls which severely crippled and contributed to the shutdown of the T, the Koch-funded institute says if you’re looking for someone to blame, why blame Mother Nature when you can blame the hard-working men and women of the Boston Carmen’s Union. Saying the snow had nothing to do with the shutdown of the T is like saying the Koch Brothers don’t care about money. They make up their own facts because they don’t care about customers and hard-working people … they only care about cash. And, for them, the fight pitting greater greed against greater good is one they’ll never stop fighting.

These profit-seeking barbarians and others like them have been at the gates before and will be again. Thankfully, the last time they came knocking at the door, state watchdogs and responsible, un-Vennochi-like media members saw the silliness and called out Governor Bill Weld and his crooked cronies for a troubling pattern of abuse that fueled a perilous push to privatize as many state services as he could.

At the time, Working Massachusetts, a well-respected pro-labor policy institute, opting to refute the con, offered the following report, “They (the watchdogs) discovered that private vendors with state contracts used taxpayer money to rent posh vacation villas, buy luxury cars, and pay for lobbying activities. Watchdogs also discovered that there was little or no competition for contracts. Lucrative contracts were being awarded to former administration officials and huge executive salaries were being paid to private vendors.”

And, like a son looking to atone for the sins of his father, here comes Charlie Baker looking to succeed where Bill Weld failed. By blaming the Carmen’s Union and making them look like the problem, Baker knew labor was vulnerable and getting the legislature to repeal the Taxpayer Protection Act (or Pacheco Law) ultimately leading to the privatization of T services was going to be easier than a Larry Bird lay-up

So, Joan says the Pioneer Institute is right and labor is wrong and has no facts to back up their allegations.

Well, Joan, if you cared about facts, you probably should have read your own column first because in it, therein lied plenty of them. Apparently, you failed to see the link to an article titled, “The Politically-Driven, Koch-Backed Campaign to Undermine Boston Transit,” which furnished the FACTS that you claim labor failed to provide. The article correctly and rightfully states: “any legitimate watchdogging of the MBTA has been buried underneath a pile of exaggerations and misleading claims originating from Pioneer and its allies.”

So, Joan, let’s examine a few of the erroneous exaggerations created to demonize and disparage MBTA employees:

These are some of the very FACTS Joan said labor was not providing.

Joan also seemed to miss her own paper’s coverage and many others, like Commonwealth Magazine, which wrote articles discrediting the cherry-picked data put forth by the Pioneer Institute. Again, more of those FACTS she said did not exist or labor needed to provide.

Lastly, a group of riders and T workers published a page that summed up all the common MYTHS & FACTS surrounding the MBTA (with some sources provided): http://fixthet.org/myths-vs-facts/. Heh look, more FACTS all in one place with sources.

So it begs the question, with all of this information publically accessible and easy to tap into with something as simple as a Google search, or dare we say, a search of the Boston Globe’s archives, is Joan Vennochi a lazy reporter or simply and sadly a pawn for privatization?

Permanent link to this article: https://carmensunion589.org/2015/09/is-the-boston-globes-joan-vennochi-too-lazy-to-read-her-own-story-or-simply-a-pawn-for-privatization/