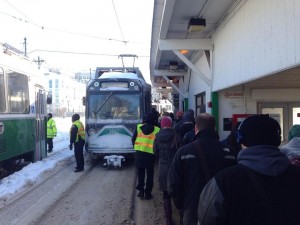 The MBTA system, burdened by aging infrastructure and equipment, has lurched and sputtered this week, leaving throngs fuming in the cold about commutes nasty, brutish, and long. Governor Charlie Baker decried the delays and said he would work to improve service.

Meanwhile at the State House, he proposed a plan to deal with the state’s urgent $768 million budget deficit that includes slashing $26 million in state funding for the Department of Transportation and $14 million for the MBTA.

The two actions have created a seeming contradiction: Aiming for better service while cutting money from the T, which some analysts say struggles from chronic underfunding.

But Baker said Thursday, based on his discussions with top transportation officials, that the proposed cuts would not have any impact on service.

Jeffrey B. Mullan, a former transportation secretary under governor Deval Patrick and now a partner at Foley Hoag LLP, said while the governor may be correct on MBTA service impacts, the cuts in transportation will be felt nonetheless.

He said the administration is being sensitive to lessening the repercussions of the proposed spending reductions, “but the thought that transportation can absorb those cuts without any impact on the program or on a host of services that are provided by transportation agencies is not realistic.”

Other outside specialists said the proposed reductions are unlikely to impact service and are small compared to the longer-term challenges facing the region’s transportation infrastructure.

The $40 million in transportation cuts, which require legislative approval, would impact this fiscal year, which runs through June.

Stephanie Pollack, the state transportation secretary, said the planned cuts, which involve some job vacancies not being filled along with other measures, were careful, strategic, and not as deep as they appear because some diminished state funds would be replaced by other sources of money.

“I am highly confident that these will not affect MBTA service” or maintenance, she said. “And on the MassDOT side, they are also designed to not affect direct, customer-facing service.”

“It sounds like a litany of administrative things that aren’t going right to the heart of service,” said Stephen J. Silveira a former MBTA official and the former chairman of a state​ transportation finance commission. “It sounds like these cuts can be done without having any impact on service.”

He said the old equipment and infrastructure on the T is the main driver of service disruptions like the ones seen this week.

In a telephone interview, Pollack outlined the sweep of the proposed cuts.

On the MBTA side, Pollack said $5.4 million worth of the cut in state spending would be replaced by higher-than-expected T fare revenue so, in effect, that would not be a cut at all.

Another $3.3 million in cuts come from savings on materials and supplies, but not those related to service or maintenance, she said.

And $5.3 million comes from not filling vacant positions across the bureaucracy. But, Pollack said, “frontline service positions,” such as bus and subway operators, would be protected.

Asked the number of positions that would go unfilled and their types, Pollack said she did not have that information readily available.

“They’re positions throughout the organization,” she said. “We sort of went through and found positions that were vacant that we feel comfortable not filling for the remainder of” the fiscal year.

In total, she continued, the proposed cuts are a small fraction of the T budget, which she pegged at $1.9 billion.

Rafael Mares, a senior attorney at the Conservation Law Foundation and a specialist on state transportation, said, based on Pollack’s explanations, it did not appear that the MBTA spending reductions would hurt service.

“But if you’re asking: Is there no pain from the transportation system cuts? It would be naive to say that,” he said.

Pollack said for the Department of Transportation, a big chunk of the proposed $26 million cut in state spending would not, in effect, be a cut. The money, $11.4 million, would be replaced with surplus revenue from a vehicle inspection fee account.

Other Department of Transportation cuts planned, according to the secretary: $5 million in materials and supplies and $5 million in office and administrative expenses.

And the rest, $4.6 million, would be in attrition and not filling vacant positions, she said.

Top legislative leaders have not weighed in on the specifics of Baker’s proposed cuts to transportation.

Transportation funding, and money for the MBTA in particular, have been long been a dilemma on Beacon Hill.

In 2013, Governor Deval Patrick proposed higher taxes to fund transportation infrastructure and other priorities. He was rebuked by the Legislature, which pared back his $1.9 billion tax hike. The legislation that became law included a 3-cent increase in the state’s per-gallon gas tax to 24 cents. (Gas tax revenue is mandated to go to a transportation fund that supports road and bridge maintenance, as well as other transit infrastructure.)

Beginning this year, the law linked the gas tax to the Consumer Price Index, which meant it would have gone up as consumer goods and services got more expensive. But the inflation linkage never went into effect: Voters in November passed a ballot measure, backed by Baker, nixing that connection.

He was asked Thursday, given this week’s severe transportation delays, whether his administration plans to revive a public discussion about additional investments in transportation infrastructure.

“Everybody always wants to spend more money on everything, I get that,” he said, adding he is going to start that conversation with Pollack, officials at the MBTA and the Legislature. “But we did we just raise the gas tax here in Massachusetts by 3 cents.”

Mares said he remains concerned about longer-term issues including the aging transportation infrastructure that was part of the snow and cold weather transit snarls this week.

“The transportation system as a whole is chronically underfunded and has maintenance needs,” and Baker’s proposed cuts won’t help fix that, he said.

Permanent link to this article: https://carmensunion589.org/2015/02/will-proposed-mbta-cuts-hurt-service/