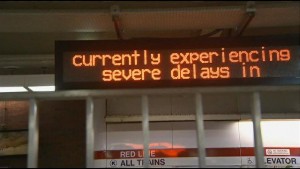 What is the value of holding a major civic event after a winter storm in a city where the wheels have gone off the mass transit system?

When the history of the New England Patriots Super Bowl XLIX victory parade is written, all of that will have been long forgotten. What will remain in Boston’s collective memory is how people powered through to come out to celebrate their storied team.

At least, that’s the narrative that Boston Mayor Marty Walsh, Gov. Charlie Baker, and Boston 2024 Olympic organizers are counting on.

Walsh has put himself into an impossible position. If the Patriots parade through the city’s snow-cleared, upscale shopping district goes off with only a few hitches, he’ll look like a hero and an organizational genius-except to those Boston residents who have endured hellish commutes from neighborhoods with unplowed streets. Walsh has remained resolute — and got testy — in the face of questions about whether it was a good idea.

Baker has a different roster of problems. Some Massachusetts progressives have argued that he shares the blame for the MBTA’s legendary decrepitude, courtesy of his Big Dig decision-making. That’s a subjective conclusion.

What is more concrete is that the governor deemed the T’s recent performance “unacceptable.” That declaration puts him and Stephanie Pollack, the former transit advocate turned state transportation secretary, on the hook to deal with the system’s laundry list of maintenance issues.

As for Boston 2024 Olympic organizers, they have already unleashed the “We are bidding for the Summer not the Winter Olympics” public relations juggernaut. A parade that goes off against all odds also feeds into the Boston Strong narrative that is so appealing to US and international Olympic officials.

But as Richard Davey, the former state transportation secretary now serving as Boston 2024 CEO, knows better than anyone else, travelling on the T in the summer has its own circles of hell, courtesy of air conditioning failures, overheated engines, and heat restrictions, to name a few.

If there were any people left in metro Boston who did not know that the MBTA needs billions of dollars of maintenance fixes, the last few days have probably clued them in. After a group of Bay State wise men (and one woman) delivered their verdict on what ails the state transportation sector almost a decade ago, a few years’ worth of prudent investments (switch heaters anyone?) might have minimized Tuesday’s crisis.

As the eminent political scientist Cyndi Lauper once said, “Money changes everything.”

But the funding required to help the MBTA stave off collapse in the face of winter never materialized. The current responsibility for the underinvestment in the system lies with 198 state lawmakers and their leaders, House Speaker Robert DeLeo and former Senate president Therese Murray.

They decided not provide the funding to make the improvements that the MBTA and the rest of the state transportation sector needs. Motivated by a diverse and often contradictory set of fiscal, political, and regional concerns, they trimmed former governor Deval Patrick’s transportation ask to the bone.

They are not alone. Three months to the day before one of the worst 24 hours in MBTA history, Massachusetts voters took about a $1 billion dollars out of the transportation network all by themselves.

Which brings us back to the spectacle of commuters kicking out windows, colossal mass transit delays, and mind-blowing traffic jams. Money does change everything. Conjuring up the dollars to revitalize the MBTA requires state lawmakers and voters to make some different decisions. One thing is certain: It is easier to move mountains of snow for a Super Bowl victory parade than to tackle this monster.

Permanent link to this article: https://carmensunion589.org/2015/02/mbta-textbook-case-civic-dysfunction/