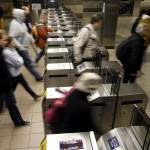 Massachusetts Bay Transportation Authority officials on Wednesday will take up a plan backed by Governor Charlie Baker to privatize departments that maintain fare machines, count cash fares, and run marketing and retail operations, a step that could eliminate about 250 jobs in all, according to MBTA officials.

The move targets the highest-profile public agency in the state, one that provides transit services to hundreds of thousands of people, but that has drawn widespread public criticism for unreliable service and aging equipment.

MBTA and administration officials say they believe outsourcing the services could help the T vastly improve its fare-collection system and save millions of dollars that could be invested in the system. No specific figures on savings have been made public.

“The goal isn’t reduction of full-time employees,” said Tim Buckley, spokesman for Baker’s administration. “It’s to find ways for the MBTA to do its job better.”

MBTA officials are scheduled to discuss privatization during Wednesday’s fiscal control board meeting, but no formal proposals with specific companies exist yet.

The proposal drew instant criticism from the Boston Carmen’s Union, Local 589, the MBTA’s largest labor group and the union that represents 77 of the jobs that could be cut and given to outside companies.

“We’ve seen in other parts of our public transit system that privatization clearly doesn’t equal improved service, or reduced cost,” James O’Brien, the union president, said in a statement. He was specifically critical of a proposal to privatize the counting of cash fares. “Privatization of the ‘money room’ means a real possibility that men and women will get pushed out of their jobs, for an untested, overly expensive automated system.”

It would be among the first attempts by Baker’s administration to outsource services since the Legislature agreed to temporarily suspend a state law — specifically for the MBTA — that put up hurdles to privatizing public-sector jobs. The MBTA has considered privatizing some bus routes, but promised no layoffs would accompany that move.

O’Brien said he agreed the MBTA should spend money on improvements, but he warned that the control board must “stop trying to balance the overburdened MBTA budget on the backs of the men and women who work tirelessly every day to keep it running for passengers.”

T officials might put out a request for proposals within a month for companies that would take over fare collection maintenance and money-counting, said Brian Shortsleeve, chief administrator of the MBTA.

The exploration of privatizing such services comes as the MBTA searches for ways — including sizable fare hikes —to close a $242 million budget gap for the 2017 fiscal year. Officials have presented data that show they have made some progress, but Shortsleeve said a deficit still remains.

Without outsourcing, Shortsleeve said, “it’ll be harder to balance the budget.”

MBTA officials said they don’t yet have an estimate for how much could be saved by outsourcing jobs. But they pointed out several departments that could be targeted for outsourcing — positions that currently cost the MBTA about $65 million a year, in total.

About 165 jobs dedicated to fare collection and cash handling could be targeted in the privatization effort, MBTA officials said. In addition, they will look to privatize marketing services and retail operations; management of warehouses and materials; management of employee leave; management of telecommunication; contracts; and employees who handle the dispatch system for Transit Police. They will also look for savings in cleaning and elevator maintenance crews, which are already outsourced to private companies.

Officials say that some jobs would be retained, since employees in the eliminated positions could return to previous jobs as bus or subway drivers, or electricians. Others would retire or stay on to manage the contracts for outside companies, officials said.

Some of the biggest job losses would hit those who work to maintain the fare machines and the software that runs them, and those who count cash fares in the MBTA’s Charlestown office called the “money room.” The MBTA is expected to spend about $34 million in the 2016 fiscal year on 165 of those employees.

In the early 1990s, MBTA officials and then-governor William Weld tried to privatize the cash-counting operation. The Legislature, meanwhile, passed the so-called Pacheco Act, which made it harder to outsource public jobs. MBTA workers retained control of the operation after the union bid to keep the jobs with union workers.

More recently, a 2012 report by state Auditor Suzanne Bump found several lapses in security practices for the money room, such as lost keys, incomplete tracking of fare box cash and deposits, and fare money not being protected. Bump said auditors found no evidence of lost money or theft, but the MBTA failed to properly keep track of $100 million in fares collected in a five-year period.

Since the Legislature last year temporarily repealed the Pacheco Act for the MBTA, officials have called for information to gauge interest from the private sector on taking over fare collection. Thirteen companies responded, including well-known names such as Wells Fargo, Xerox, and Accenture, according to officials.

MBTA officials have pointed out that the transit agency would not be the first to outsource its fare collections: The Chicago Transit Authority and Transport of London have used outside vendors to manage fare collections.

In Chicago, however, the transition to a private company was riddled with flaws. Customers sometimes complained of being overcharged, and local media discovered that the costs of the contract increased beyond original projections.

Massachusetts officials said they would pursue the options only if the privatization plans would actually lead to better service, by partnering with knowledgeable companies.

Permanent link to this article: https://carmensunion589.org/2016/02/mbta-to-consider-privatizing-services-involving-250-jobs/