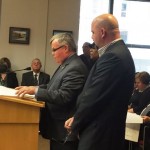 Local 589 President Jimmy O’Brien speaks out against T’s plans to outsource jobs during Wednesday’s joint meeting of the MBTA Fiscal and Management Control Board.

BOSTON – The MBTA’s plans for a dramatic reduction in its business-side workforce through outsourcing of cash handling and fare gates generated a forceful rebuttal from transit unions at a Wednesday meeting.

“A big part of this is to improve performance,” Chief Administrator Brian Shortsleeve told reporters. He said there are 165 employees in the T’s money room – located in Charlestown’s Sullivan Square – and 37 are eligible to retire.

Shortsleeve also said that many money room workers could return to positions driving vehicles, an area where the T is hiring, and fare gate maintenance staff could perform other electrical work.

“Make no mistake with privatization, there’s always a potential for layoffs, hurting families and workers. Some people will have fallback rights but others will not,” James O’Brien, president of the Boston Carmen’s Union, told the News Service.

A policy brief released Tuesday by the Pioneer Institute claimed “huge management payroll increases” at the MBTA. The brief, which cites data made public by the National Transit Database, says the agency’s general administration employee count increased by more than 79 percent between fiscal year 2008 and fiscal year 2014, from 279 to 481.

In addition to outsourcing the money room and operation of automated fare collection systems on the bus and subway, the MBTA is considering privatization in managing employee leave, warehouse logistics and other corporate services.

Shortsleeve said he hoped to reduce the MBTA’s business side operations headcount from about 650 down to 400, with system operations continuing to be undertaken by state employees.

Last summer, the Legislature suspended what’s known as the Pacheco law, handing the MBTA the ability to privatize services without going through a vetting process overseen by the state auditor.

“Privatization does not guarantee that there’s going to be a cost-savings or a better efficiency. Our guys have been doing the work. They’re senior employees. They do a great job at the work they do today,” O’Brien said. He said, “There’s always a safety and security issue when you’re going to hand the keys to a private company.”

Shortsleeve said privatization would shift risk from the T to a private company and could offer solutions to technological challenges, such as the communication difficulties between software in the fare gates and software in the money room.

O’Brien said the Carmen’s Union wants to be a partner in modernizing the T’s payment system and other employees vouched for their enthusiasm for the work.

“I enjoy where I’m at. It’s a great opportunity and we work hard,” Antrynette Hobbs, a senior revenue agent in the money room, told MBTA overseers at a meeting Wednesday. A Mattapan resident, Hobbs is an 18-year employee of the MBTA who used to drive buses.

During Wednesday’s joint meeting of the MBTA Fiscal and Management Control Board and the Massachusetts Department of Transportation Board of Directors, the MassDOT board’s labor representative Russell Gittlen likened labor to a family, and said, “You don’t just throw your family away and buy a new family.”

Steve Tolman, president of the Massachusetts AFL-CIO, said MBTA employees have been “demonized” in the press and said the T should receive more funding.

“It seems somewhere along the line we stopped wanting to fund it,” Tolman told transportation officials.

Developing a request for proposals will take a few weeks, Shortsleeve said.