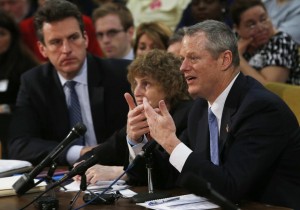 Governor Charlie Baker testified in support of the MBTA overhaul bill at the State House on Monday. Photo by JESSICA RINALDI/GLOBE STAFF

The leadership, which plans to roll out its own, more modest T legislation Tuesday, is spurning the governor’s high-profile push for a special board to oversee the public transit agency’s finances and operations.

Leaders are also resisting Baker’s drive for greater power to privatize services and raise fares on subways, buses, and the commuter rail, calling for a more measured approach to the MBTA’s thorny problems for now.

“We believe this is the right direction,” said state Senator Thomas M. McGee, cochairman of the Legislature’s Joint Committee on Transportation, arguing that the Senate’s bill would give the administration enough authority to substantially improve the agency.

The Senate’s rebuff comes as the governor, soaring in public opinion polls, invests substantial political capital in his proposed T fix. Baker personally appeared before the transportation committee Monday afternoon to urge lawmakers to approve his bill. “There’s an old maxim that if nothing changes, then nothing will change,” he said. “And it is as simple as that.”

After his testimony, Senate leaders sent the administration a copy of their legislation. Monday night, Baker spokesman Tim Buckley echoed his boss’s testimony from earlier in the day. The governor looks forward to reviewing the Senate proposal, he said, but “maintains that if nothing changes, then nothing will change at the MBTA.”

The Massachusetts Department of Transportation board currently oversees the MBTA and several other transportation functions. After a series of winter storms crippled the T, Baker pressured the board to resign and named several replacements.

But the governor wants to strip the panel of MBTA oversight and give the reins to a new fiscal and management control board for three to five years.

Some key lawmakers, though, say a second board is not necessary. “Why have another bureaucracy put in place between the governor and getting things done?” said Senator Marc Pacheco, a Taunton Democrat, testifying before the transportation committee Monday.

Pacheco also defended a law he authored years ago, widely referred to as the Pacheco law, that puts up hurdles to privatizing public services.

The Baker bill would exempt the MBTA from its provisions, a proposal that has engendered sharp opposition from T unions, who rallied outside the State House Monday and packed the hearing.

The governor insisted, in his testimony, that he is not out to privatize broad swaths of the MBTA. He said he just wants to build a more “reliable, predictable, affordable public transportation system.”

House Speaker Robert A. DeLeo, who has generally aligned himself with Baker on the T, has called for a suspension of the Pacheco law for the T.

But Senate leaders have signaled for weeks that they are skeptical of any efforts to scale back the measure.

Senate President Stanley C. Rosenberg, in a round-table discussion with reporters last month, said the Pacheco law has long been a “political target” for conservatives and suggested that critics are taking advantage of the T crisis to weaken it.

“There’s an ideological-slash-political component to this,” he said. “We ought to be driving policy based on outcomes and data and how things actually work.”

Rosenberg noted the state has approved most attempts to outsource public services since the measure passed, despite its restrictions.

But Baker’s transportation secretary, Stephanie Pollack, said Monday that the law is too narrowly written. It prevents the T from proposing some of the changes the agency envisions, she testified at the hearing, never mind winning approval.

The Senate’s T legislation, attached to a larger budget bill set for release Tuesday afternoon, does give Baker some small victories.

Senate leaders say the move would give Baker direct control of the T and ample opportunity to implement management reforms. If the administration cannot make enough progress in the coming months, they say, the chamber would consider alterations to the Pacheco law and other changes sought by the governor.

But for now, they say, Baker is asking for too much, too quickly.

The governor, among other things, is asking lawmakers to lift a recently imposed cap on MBTA fares that limits increases to 5 percent every two years.

Baker says he does not envision major new fare hikes in the near future. But the administration has argued that lifting the cap would allow for greater financial self-sufficiency in the long run.

Advocates, though, say the current law keeps fares affordable and increases predictable. Before its passage, said Lizzi Weyant, advocacy director for Transportation for Massachusetts, the T would go years without hikes and then propose large increases that jarred riders.

The Senate legislation would leave the cap intact.

The governor, who has criticized the MBTA for poor cost containment, would eliminate a 2013 funding boost for the state’s transportation system, including the T, valued at $500 million over the next five years.

But Senator Karen Spilka, chairwoman of the Senate Ways and Means committee, said the chamber’s budget would keep the funding in place.

“I think they need the resources,” she said, adding that Beacon Hill is just at the start of a “broad discussion” about the funding and management of the T.

Even as Senate leaders prepared to file legislation trimming Baker’s ambitions, the governor’s allies were voicing support for his approach.

Jim Klocke, of the Greater Boston Chamber of Commerce, testified Monday that the creation of a fiscal control board was the first step to making “real changes” at the T.

“A three-year control board that is empowered to perform a more in-depth analysis of the special MBTA panel’s findings, identify the most impactful reforms, and most importantly, implement those reforms, will be able to transform the T,” said Klocke, the chamber’s executive vice president.

Permanent link to this article: https://carmensunion589.org/2015/05/senate-leaders-reject-bakers-plan-to-shake-up-mbta/