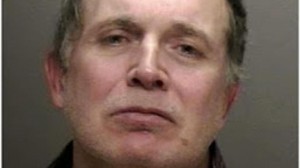 An East Boston man who threw a tantrum because he couldn’t board a crowded MBTA bus at Maverick Square Station was arrested after kicking in a bus window and later kicking a transit officer in the leg, police said.

Thomas Caruso, 55, is set to be arraigned tomorrow on charges of malicious destruction of property, assaulting a police officer and receiving stolen property, according to MBTA transit police.

Caruso tried to board a packed MBTA bus during the Friday evening commute but was told to wait for the next one because there was no space, transit police said.

He then began to scream and kicked at the bus, breaking the window, before leaving, according to transit police.
Caruso was found on nearby Paris Street, identified by an MBTA employee, and arrested.

But when transit cops tried to put him in a cruiser, he allegedly kicked one of the officers in the thigh.
During the booking process, transit police said they found several items from Marshalls that still had anti-theft security devices attached to them.

Permanent link to this article: https://carmensunion589.org/2013/12/eastie-man-kicked-in-bus-window/