Video: Which Side Are You On? 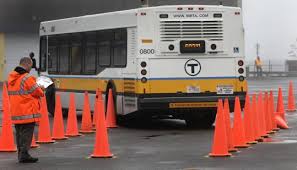 Veteran driver Willis Rose Jr.’s run during the finals of the annual MBTA Bus Roadeo began with a rocky start.

At the first test out of the gate, he lost a few points when he drove the bus’ tires over a couple of tennis balls lined in two successive rows, barely far enough apart so that a tire could inch between them.

But the 53-year-old Malden native kept his cool for the next seven minutes – maneuvering and weaving the massive vehicle in between and around the course’s remaining 14 obstacles designated by orange cones, barrels, and other markers.

For the second time in a row, and the third time in his career, Rose was crowned champion Friday.

“Nothing fazes me anymore,” he said.

That’s because he’s spent the past 16 and a half years driving a T bus around Boston, the 53-year-old Malden native kept his cool through the rest of the course.

During that time, he said he has “pretty much seen everything.”

One of the keys to the competition, and to successfully driving a bus on often treacherous city streets, is patience, he said.

“Don’t be in such a hurry. Slow it down out there,” Rose said, moments before starting his run.

Robbie Wilson, a 56-year-old Boston native, has driven an MBTA bus for the past 20 years. Over an estimated 50,000 trips, he has had a “preventable accident” – which is a tougher standard than the “being at fault” measure that most drivers worry about.

In addition to taking it slow, Wilson added that bus drivers learn to “expect the unexpected at all times.”

“You can’t relax, unless you’re parked. And, even then you need to keep an eye out because something bad can happen,” he said.

Friday was Wilson’s 8th time competing in the finals. He has never won and placed fifth this year.

The 36th annual competition was held at the T’s bus yard in Charlestown. Mid-morning rain and wind added another wrinkle for the one dozen drivers who qualified for the finals, which organizers of the “roadeo” described as a remarkably challenging set of hairpin and serpentine turns.

“If you’re off by just inches, you’ll be hitting a cone,” Rose said.

There are three judges aboard each bus and two more at each obstacle. The drivers start with about 750 points. Each mistake costs them. They are judged by members of the T’s safety department on some obvious and other less noticeable aspects of their driving.

A driver’s score can be deducted if parts of the ride are not smooth; if there are sudden stops or abrupt turns made; if they don’t use their mirrors properly; if they don’t exhibit good posture, if they don’t sound the bus’ horn and turn on its flashers before backing up; if they don’t make proper announcements, among many other factors.

The final obstacle has drivers race to have the bus reach a minimum speed of 20 miles per hour before hurtling through a two rows of barrels that get closer and closer as the finish line approaches, where drivers try to, in one braking motion, stop as close to a final cone as possible.

No one has ever had a perfect score, said Sue Lebbossiere, the T’s superintendent of bus training. Winners usually fall short of the maximum possible score by between 150 to 200 points.

“It involves a lot of skill,” she said. “What they’re doing today they don’t get a lot of formalized training for.”

A few portions of the course require drivers to back the bus into tight spaces.

The T does not teach its drivers how to steer in reverse because they are told to avoid such a maneuver at all costs when they are on the road, Lebbossiere said. If absolutely necessary, a T bus driver should only reverse with help from an assistant, she said.

The competition is organized and judged by current staff, none of whom are on the clock, as well as former staff, including some ex-drivers. Among them, was Lorraine Landsburg, a 48-year-old West Newton resident who drove buses for the T for 12 years.

She won the competition in 2001. She is the only woman to ever capture the title.

“Everybody’s rooting for each other,” said Landsburg, who still drives for a private bus company and also works as an instructor for the T. “Nobody holds back secrets because they want it to be fun, they want that challenge.”

The competition is more than just comparing driving skills. The 32 drivers who qualify for the preliminary competition have the best attendance and the fewest complaints and accidents on their record.

The “roadeo” costs the T about $15,000, which includes cost for a post-competition lunch and some cash prizes. Some have pressured the cash-strapped public transit agency to do away with the contest.

But, agency leaders said such events are critical to employee morale.

“We will continue to hold events like this,” Acting General Manager Jonathan Davis told the crowd of drivers and other staff Friday. “It’s an investment in you and also an investment in our customers.”

The winner each year moves on to represent the MBTA at the American Public Transportation Association’s International Bus Roadeo, a competition that Lebbossiere said the T has never won. The upcoming competition will be held in Indianapolis in May.

The all-time leader of the T’s competition is the legendary bus driver Robert Chaffee. Now retired, he won 15 championships.

With three career victories, Rose is far behind Chaffee. But Rose said he hopes to keep driving T buses for as long as he can, perhaps another 10 years or so, and he hopes the contest will keep rolling along with him.

“It’s a great thing for all the new operators that are coming on board – I know they want to try to knock me down,” he said.

Permanent link to this article: https://carmensunion589.org/2012/10/veteran-driver-wins-2nd-straight-mbta-bus-roadeo/