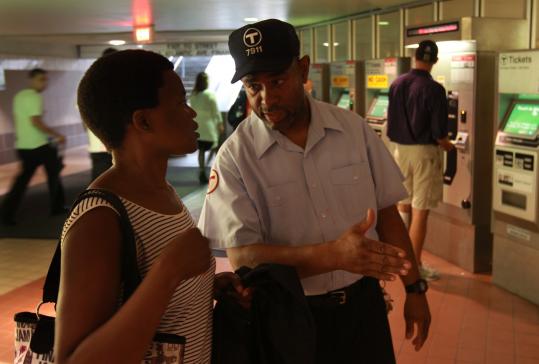 There were more pigeons than people circling South Station when John Perez rolled in one morning, a few minutes early for his 5:45 a.m. shift. Over 26 years, Perez has logged more than 6,000 workdays as an MBTA bus driver, token collector, and Red Line customer service agent. He says he has never been late.

The day started with a trickle of customers: A man with an express mail envelope in one hand and a coffee cup in the other wanted to know which train went to Park Street. A woman with a British accent, two children in tow, asked how to get to Logan. Five Japanese tourists stood before a bank of vending machines, puzzling over the instructions.

As activity built in the station, hundreds of questions would come his way, the brief moments of silence interrupted by two and three queries at once:

“Hi! I’ve never ridden the train before, but I need to get to the airport.’’

“How do I get one of those CharlieCards?’’

Perez, 47, is one of about 280 customer service agents at the MBTA, and like many he is a former token seller, a job replaced by the CharlieCard vending machines. Now the rebranded customer service agents — CSAs, as the T calls them — are the first employees riders encounter when they enter most stations and the last they see when they leave, helping to shape the public’s impression of the frequently maligned MBTA and its workforce.

MBTA general manager Richard A. Davey and Jeffrey B. Mullan, the state’s transportation secretary, have said they want to make customer service a priority, and they consider it unacceptable that people “love to hate the T.’’ They acknowledge that some employees reinforce a stereotype of lackluster performance, but they also say that front-line workers are as underappreciated as any in state government.

A day with Perez offers a window into the work that the T’s 6,000 employees perform daily as they try to smooth the public’s relationship with an aging system that each day manages to move 1.25 million riders through Eastern Massachusetts.

Not everyone on the job embraces the T’s “Driven by Customer Service’’ motto, but Perez says he enjoys answering questions and trying to ease people’s trips. He does not snicker when customers stand before the sign with the airplane icon and arrow and ask how to get to the airport. He gives instructions slowly, pointing out stops and tracing routes on an oversized map, walking people to the right set of stairs.

When they curse rumpled bills, he flattens them expertly; when their credit cards cannot be read, he swipes them with ease; when they insert their CharlieTickets into the reader at the gates upside down, he points to the arrow and shows them the right way.

“I love working with John, ’cause he’s so efficient,’’ said Lillie McAfee, a fellow agent working with Perez on the shift.

Perez grew up in Dorchester and attended a magnet school in East Boston, riding the Blue Line in the days when it still had wooden seats. After graduating, he applied for the T’s jobs lottery, took the requisite test, and sold tires for two years until his number came up.

He began as a bus driver, before air conditioning and power steering, standing up to muscle through tough turns. He drove out of the Cabot garage in South Boston, on a mix of quiet commuting runs and routes known for problem riders and surprises. After 14 years, he switched to the calm of token sales.

Perez typically works one of the Quincy stations, where he has attracted an assortment of regulars, like the man who visits each week to keep his CharlieCard topped off at $100. Filling in at South Station, he sometimes seemed like the straight man in a comedy routine, maneuvering politely as women flirt with him. “You have magic fingers,’’ one told him, after he got the vending machine to work. “Can you come along with us next time?’’ another cooed, after he patiently walked them through the purchase process and mapped out their route.

Tourists peppered him with unusual questions, like where to find the nearest PNC Bank, none of which is located north of New York. Several times he helped lefties who bounced off of closed fare gates; the system is designed for right-handed card use, with the gates opening to the left. And he explained to first-time monthly passholders why their August passes were not working in the last week of July.

There were problems, of course.

As McAfee arranged a stack of CharlieCards into a diamond pattern on the customer-service desk, a passing customer cleared his throat noisily and spat into a trash can near her arm. Watching the fare gates, she noticed an elderly man slip through behind a paying rider.

“Excuse me, sir! Hello!’’ she called, and he pretended not to hear her. “Hello!’’ She sped after him, her neckerchief bobbing, and caught him on the stairs, shaming him into returning to the vending area. “Lillie was hot on him, boy,’’ Perez said, grinning.

The man pleaded ignorance, then grudgingly extracted a wad of bills and paid the fare.

“The strangest thing about it is the people that don’t want to pay, they always have a pocket full of money,’’ McAfee said afterward. She and Perez have heard them all: “I haven’t cashed my check,’’ “I was just in the hospital and they said you’re supposed to let me ride for free,’’ and so on.

Perez scanned the lobby and noticed a lone bill on the tile floor, sitting like a prop in front of a Citizens Bank ad that said “Money shall not be caught loitering.’’ He picked it up, fed it into the vending machine, and quickly destroyed the $1 CharlieTicket that emerged, following MBTA protocol for lost bills that lack an obvious owner.

Perez was more than halfway through a busy but unmemorable day when, at 11:30, an intoxicated man in a tank top and shorts stumbled in, awkwardly wielding a cane and clutching a water bottle. Toting a heavy backpack, he slipped through the gate, then moved in an unsteady circle around the paid portion of the lobby.

“We’ll get someone to escort you to the train so you don’t hurt yourself, but you need to know where you want to go,’’ McAfee said. The man could not say. She and Perez flagged down chief inspector Tom Lydon, who escorted the man up the ramp toward the main terminal at South Station.

Twenty minutes later, he returned. “Back again?’’ Perez asked. Perez encouraged him to leave but refrained from placing his hands on him, following policy.

As McAfee helped a tourist in a Country Music Television T-shirt, a man dressed for a hike approached Perez, toting a book about Chile under Pinochet, and sought help extracting a $4 CharlieTicket that had been eaten prematurely by the fare reader. After Perez retrieved it, he turned back toward the drunken man, who had wandered into the paid area and was ambling toward the Red Line. “Where do you want to go? Tell me where you want to go,’’ Perez implored. The man only groaned.

“Quincy Center? Braintree? Ashmont? Fields Corner?’’ Perez said, naming stations. “If I’m going to help you, you’re going to need to tell me where you want to go.’’

The man convulsed in a coughing fit, then crumpled in a heap on the tile. “My head is really [messed] up right now,’’ he said. Lydon offered both hands to try to help the man pull himself up, but he kept collapsing midway.

“Why don’t we head upstairs, OK?’’ Lydon said, coaxing the man toward the elevator.

The day winds down

A succession of colorful characters came through: a woman with a Nintendo-controller tattoo and a frayed “zombies love me for my brains’’ T-shirt, held together by safety pins; a guy with two hiking packs, a vuvuzela noisemaker protruding from one and bearing stickers from the World Cup; a young man with a chinstrap beard and his heavily mascaraed girlfriend, neither of whom could grasp, despite Perez’s explanations, why swiping to enter the station subtracted from the sums they had loaded on their CharlieCards.

A teenager in layered T-shirts approached, his voice barely above a whisper. “Excuse me, sir. I’m not from around here. I’m trying to get on the Orange Line to Ruggles, and I’m wondering if you can spare me the fee. I got locked up. This is my first day out. And I’m trying to get to DYS,’’ he said, using the acronym for the juvenile-justice department. Perez rolled his eyes, sighed, reached into his pocket, and handed over enough change for him to get home. “Thank you, sir,’’ he said.

The phone rang behind the desk, apparently about a report that McAfee had been sitting on the job. “Now they got reason to complain,’’ she said, fuming, as Perez tried to get her to take a deep breath. “They done messed up. I was one of the best CSAs they got. Now I’m going to be like everybody else. I’m going to work by not working.’’ She stormed off. But a few moments later she was back, helping a father with two young girls navigate to the Children’s Museum. “See, even if I want to not help, I can’t do it,’’ she said.

It was 1:50, nearly the end of the shift. The drunken guy stumbled back into the station. “You’ve been told three times that you can’t ride; you’re intoxicated,’’ Perez told him. Lydon and another inspector were there, and the Transit Police were waiting. “You don’t want to get arrested,’’ the inspector said. “Sober up, come back.’’

A man in a suit approached, asking Perez what it costs to get to Kendall. An Amtrak conductor sipping iced coffee, his shirt already untucked as he departed work, asked to be waved through for free. The T police arrived to gather the drunken man. An announcement came over the PA: “Attention passengers: The next Red Line train to Braintree is now arriving.’’

“That’s our ride,’’ Perez said, and he headed down the stairs for home. When the train arrived, he let everyone off before he stepped on.

Inside, the car was mostly empty, but Perez stood anyway. Off the clock but still in uniform, he didn’t want to look like he was sitting down on the job.

Eric Moskowitz can be reached at emoskowitz@globe.com.