Celebrating National Get On Board Day 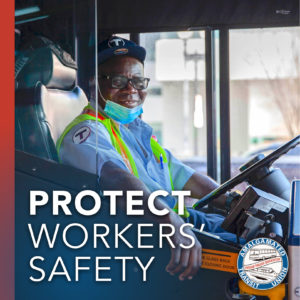 Today, we commemorate Workers’ Memorial Day, marking the passage of the Occupational Safety and Health Act which granted every worker the right to a safe job. Workers’ Memorial Day is dedicated to remembering those who have fallen ill, become injured, or died due to unsafe working conditions. As we remember those we have lost, we continue to fight for stricter protections for transit workers in Massachusetts and across the country.

Assaults against transit workers continue to be a significant concern for workers, transit agencies, and the public and have increased throughout the COVID-19 pandemic. Through the advocacy of Local 589 and other transportation labor groups, we broadened the definition of what is considered an assault on a transit worker, so those harmed on the job can receive the care they need.

Under past legislation, workers were only considered assaulted if they spent more than 48 hours in the hospital and had severe internal injuries. As a New York City transit worker said, “You could have a worker with a broken nose, and it would not be considered an assault under the current guidelines.” Provisions in the Bipartisan Infrastructure bill changed the definition. If anyone knowingly interferes with health, safety, or life, it is now considered an assault. This new policy will make it easier to prosecute offenders and deter future assaults, helping keep transit workers safer.

Unions have long been the champions for working families, leading the charge for safe working conditions. Local 589 will continue to advocate for updated workplace safety protections to keep transit workers safe and healthy.

Click here to learn more about Workers’ Memorial Day and its history in the labor movement.

Permanent link to this article: https://carmensunion589.org/2022/04/honoring-workers-memorial-day/