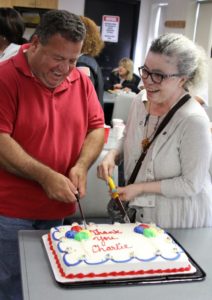 LYNN — The Boston Carmen’s Union honored a passenger who intervened when a knife-wielding passenger stabbed an MBTA bus driver.

Charles Rozopoulos was treated to a pizza party and awarded a black union jacket by the union Monday, the same one worn by T drivers.

The Lynn resident is credited with coming to the aid of York Makonnen who was driving the Route 426 bus on Boston Street near the Saugus line near midnight on May 20. As the bus headed to Lynn, the driver heard someone scream and pulled over.

Rozopoulos said he saw the suspect, later identified as Gustavo Merida, 53 of Lynn, approach the driver with a knife. As the suspect slashed Makonnen in the back and shoulder, Rozopoulos wrestled the knife away and pushed Merida to the floor. Other passengers held the suspect down until police arrived.

“I was bleeding and thought I would die,’ said Makonnen, who has worked for the T since 2010. “I was lucky all my passengers love me and many of them, including Charlie, leaped to save me.”

It was also fortunate that a doctor happened to be on the bus and helped stop the bleeding and assisted her off the bus, she said.

Rozopoulos said Merida boarded the bus at Wonderland where he appeared to be drunk. He didn’t think twice about assisting the driver by grabbing something and hitting the assailant in the head, he added.

Merida was arraigned in Lynn District Court and faces charges of assault and battery with a dangerous weapon. He is being held without bail and is expected to appear in court on Thursday for a pretrial hearing.

Makonnen, who was treated for her injuries and released, does not plan to return to work as a driver. In her first interview since the incident, the 62-year-old native of Ethiopia who lives in Chelsea, said the memory of the late night stabbing still haunts her.

“I don’t think I could ever drive a bus again for the public because I’m so scared,” she said.

Patrick Hogan, a Division 3 delegate of the Carmen’s Union which represents more than 6,000 transit professionals, said it’s not unusual for drivers to face hostility from angry and crazy customers.

“You hear about attacks, but lots of stuff, like verbal abuse and spitting on drivers, never gets reported,” he said. “Many members feel the T hasn’t done anything to help out.”

Click here to read the rest of the article.

Permanent link to this article: https://carmensunion589.org/2017/07/boston-union-honors-lynn-hero/