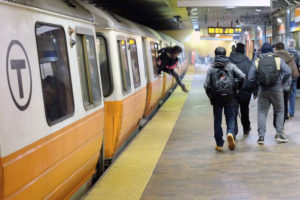 BOSTON (CBS) – There are new questions about the safety of the MBTA after passengers kicked out windows to escape a smoky Orange Line train Wednesday afternoon.

Governor Charlie Baker says it was more chaotic because of what the operator did but union members say he is a hero and the trains are the real problem.

“The train was starting to leave the station, started to smoke,” Baker said. “Under normal protocol the idea at that point is you back it up, alright, and then you announce over the loudspeaker that there’s an issue.”

The MBTA said an overheated motor was likely responsible for the smoke–but with no announcements over the intercom and no understanding of what was happening, fear set in. Several people were treated for smoke inhalation, and three people were brought to a hospital for evaluation.

The MBTA said the employee locked the doors because the train wasn’t fully in the station, and some of the doors would have led to a drop onto the third rail.

James O’Brien, President of the MBTA Carmen’s Union says the motorman did “an exceptional job” getting the passengers evacuated.

“We are disturbed that Governor Baker, today, has chosen to publicly blame that operator despite his heroic actions,” O’Brien said in a statement. “The Governor’s blame is nothing more than an attempt to deflect from the real issue: our MBTA trains are falling apart as a result of decades of neglect and lack of investment.”

O’Brien is calling for two employees instead of one on all trains dating back to the 1970’s. He says if that lone motorman had help on board, one could have handled the evacuation, allowing the other to focus on mechanics.

Permanent link to this article: https://carmensunion589.org/2016/10/gov-baker-says-operator-not-follow-protocol-orange-line-emergency/