LETTER TO THE EDITOR: We would undo Pacheco Law at taxpayers’ peril

Legislators step onto the T for a taste of riders’ experience 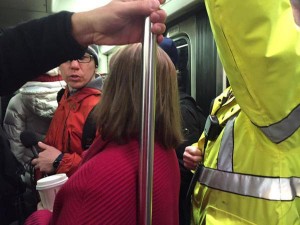 It had been more than a year since State Representative Marjorie Decker took the Red Line to work, but as she boarded a crowded train at Harvard Square before 9 a.m. Thursday, it all came back to her.

The Cambridge Democrat was one of more than three dozen lawmakers who pledged to ride the MBTA to Beacon Hill on the last day of winter, in an effort to better understand the frustrations passengers have faced in a season of regular breakdowns and delays.

“This grew out of one of my many horrible commutes this winter,” said Michele Rapp, one of the organizers.

Luckily for Representative Decker, the only hiccup during her morning commute, which began around 8:35 a.m., came when she couldn’t board the first train that pulled into the station — it was at capacity.

“Clearly, there’s a demand,” she said, standing on the platform with a coffee in hand.

Thursday’s commute also marked the first time since Jan. 22 that the T had all trains back on the tracks for every subway line.

Decker typically drives to the State House because she has two kids, and needs to drop them off at school before heading to her job.

She said she understood how critical the T is for workers who don’t have the option of driving.

When a second Red Line train arrived moments later, Decker was able to secure a spot near the door, where she kept herself steady using a pole as support between Harvard and Park Street.

“You have got to know how you use your two feet,” she said, maintaining her balance on the lurching train.

None of Decker’s fellow riders approached her during the 15-minute trip, but many took notice of the elected official onboard.

Mark Williams, of Watertown, said he’d like to see lawmakers use the train more often.

“They should try it for a full week, at least,” he said. “It’s been a crazy winter, and winter is just one piece of it.”

Once at Park Street, Decker reconvened with other legislators who committed to the cause.

State Representative David Rogers also took the Red Line from Cambridge. The fellow Cambridge Democrat said it wasn’t too crowded, and he had no problem getting on and finding a seat.

“I think the worst of it, what we saw in February, is behind us,” he said.

But that’s what riders are concerned about.

With the warmer weather approaching, some passengers worried that lawmakers would forget just how bad the winter was for commuters.

But Rogers and Decker pledged to make sure that commuters’ woes don’t go on the back burner.

“The T has been one of my biggest issues in the Legislature,” said Rogers. “We have to keep pushing.”

Permanent link to this article: https://carmensunion589.org/2015/03/legislators-step-onto-the-t-for-a-taste-of-riders-experience/