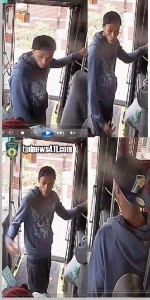 MBTA Transit Police are asking for the public’s help in finding a man who allegedly attacked and spit on a bus driver in October and then threatened her in December.

The man attacked the driver and spit on her at 2:50 p.m. on Oct. 21 after the driver asked him to pay his fare for the Route 33 bus at the stop at River and George streets in Hyde Park, said MBTA Transit Police Lieutenant Richard Sullivan.

In the second incident, the driver was on the same route, near the same stop, at 1:45 p.m. on Dec. 18, when she saw the man approaching and quickly closed the doors before he could enter, Sullivan said.

“When I see you again, I’m going to kill you,” the passenger allegedly shouted at the driver.

The passenger has been described as a black male, 20 to 25 years old, 5 feet 8 inches tall, with a thin build and sandy brown hair. He was caught on a surveillance camera during the first attack wearing a charcoal blue sweatshirt and a black baseball cap. Sullivan said the MBTA had posted images of the passenger on its website.

Sullivan said there have been around 62 assaults on MBTA drivers in the past year.

“One time is too many,” Sullivan said. “This is a tough job, and [getting assaulted is] not part of their job description. We will not stop until someone is held accountable.”

Rebecca Fiore can be reached at rebecca.fiore@globe.com.

Permanent link to this article: https://carmensunion589.org/2015/01/police-seek-man-two-attacks-mbta-bus-drive/