Report: T-Riders Save $13K Per Year 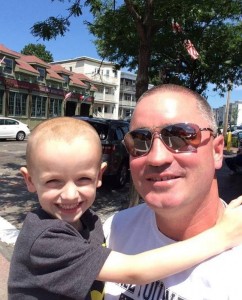 Wiffles for TK: Tommy and his dad Eddie Kelly

Aidan’s Barber Shops in Lower Mills and Adams Corner have been doing a brisk trade in wiffles this month. Always a seasonal favorite, this year’s mid-summer boom is attributable to a little boy from Dorchester whose close-cropped hair style was made out of medical necessity.

Tommy Kelly, age 4, has been battling a tough cancer diagnosis since June. Two weeks ago, Tommy and his dad, Eddie, decided to get matching wiffles as a sign of solidarity for Tommy’s anticipated hair loss from his cancer treatments. Once he posted it online, Eddie’s shot of their matching wiffles went viral, especially among the legions of firefighters from around the country who have been monitoring Tommy’s battle. (Eddie Kelly is a nationally respected labor leader and president of the state’s leading firefighters union.)

Heather Flynn, who owns and operates both Aidan’s locations, decided that she and her staff wanted to do something extra to show support for the Kelly family. She decided to plan a “Buzz-off for TK”— a day-long event set for Monday, August 4, a day when the shops would typically be closed for a day-off.

The event — initially set to be held at the shops— has now been relocated to Florian Hall to accommodate the larger crowd expected to take part in the buzz-off. All haircut proceeds and donations collected that day will go to support Tommy’s recovery. All nine barbers from Aidan’s — plus a few other volunteers from other salons— will pitch in to shave heads at Florian from 7:30 a.m- 5 p.m.

Permanent link to this article: https://carmensunion589.org/2014/07/more-wiffles-for-tk-aidans-barber-shops-plan-aug-4-buzz-off/