Call Your Elected Officials On May 20 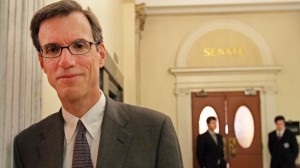 Boston Herald | Friday, May 16, 2014 | By Matt StoutThe MBTA and the T union that fought long to keep its pension fund secret have agreed to make public reams of new data — including independent audit reports, investment info and never-before-released analysis — in a deal that a top lawmaker said should finally shed light on how the $1.6 billion fund operates.“It’s done. They’re going to do it,” said state Sen. Will Brownsberger, who led the push in the Senate to pry open the MBTA Pension Fund books. The MBTA and Boston Carmen’s Union Local 589 remain in collective bargaining negotiations, but Brownsberger, who has met with people on both sides, said they both support a deal to publish the information in a revamped version of the fund’s annual report.“The MBTA union is embracing the transparency that we’re calling for here. And the MBTA management has always been for this. So I think everybody’s on the same page,” Brownsberger told the Herald. “We’re trying to get to an approach that protects the public, protects all the stakeholders, including the union members and the financial aspects of the fund, and that everyone can embrace. And I think we’ve gotten to do that.”James O’Brien, the Carmen’s Union president, said members are “for more transparency, absolutely,” but declined to discuss details, citing the ongoing collective bargaining talks. Steve Crawford, a spokesman for the fund, declined comment, and a spokesman for Transportation Secretary Richard Davey said he wasn’t available yesterday.“In working with Will, we’re going to reach a place that is going to satisfy the Legislature and the union,” O’Brien said.The pension fund had long resisted calls for more transparency — even after legislators passed a measure last year subjecting them to public records law — by citing to a decades-old Supreme Judicial Court ruling verifying it as a private trust. But fund officials, who include union leadership, signaled they’d be open to releasing more information during testimony at a February hearing before Brownsberger and other legislators.The two sides, Brownsberger said, have since agreed to follow the guidelines of the Government Finance Officers Association for the fund’s annual report. Brownsberger has filed an amendment to the Senate budget to repeal last year’s law and instead require the MBTA itself to post a list of pensioners and their annual payouts to the state’s Open Checkbook website.

Permanent link to this article: https://carmensunion589.org/2014/05/mbta-t-union-make-deal-on-pension-data/