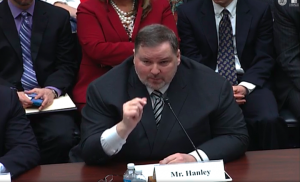 Speaking on behalf of transit workers and riders, Hanley – one of only four witnesses – told the committee that increased, and more flexible transit funding, enhanced transit health and safety efforts, expanded paratransit service, concerns with outsourcing transit systems, and workforce development are key elements to a comprehensive transportation bill.

ATU will soon publish “Doors Opening: Transit Workers and Riders United for America’s Mobility” which will lay out a full set of proposals for reauthorization of Moving Ahead for Progress in the 21st Century (MAP-21).

Urban population to increase by one third

Currently 81 percent of Americans live in urban centers and experts predict city populations will increase by a third in the coming decades. Thirty years from now the population of the Phoenix metropolitan area is projected to swell to eight million – the same as New York City today. In Austin, TX, one of the fastest-growing cities, travel times from downtown Austin to Round Rock, which is only 20 miles away, ranges from 45 to 60 minutes during the average afternoon rush hour.

“If you think the petty political trick that caused a traffic jam in New Jersey was bad, wait until you see the traffic jams across America as urban populations burst at the seams,” warns Hanley, calling on Congress to double mass transit funding over the next six years. “Generals fight the last war, legislators appropriate for the last demographic trend and we need to start investing now for the smart public transit that will enable our communities to run.”

According to the Brookings Institute the typical metropolitan resident can reach only 30 percent of the jobs in their area within 90 minutes. Others who are among the seven percent jobless in our country may be unemployed because they do not own a car.

Beyond dollars and cents

“Is it fair that those who depend on or choose public transit can’t get a job because they don’t have a car or bus route to get there?” Hanley asked the committee.

“Our nation has mixed up priorities, we aren’t paying attention to the things that really matter. As Bobby Kennedy said in 1968, it’s about our priorities and values not our GNP, ‘Too much and too long, we seem to have surrendered community excellence and community values in the mere accumulation of material things… The gross national product does not allow for the health of our children, the quality of their education, or the joy of their play. It does not include the beauty of our poetry or the strength of our marriages; the intelligence of our public debate or the integrity of our public officials’.”

“We need to think beyond dollar and cents, and pass legislation that promotes what’s most important to us all,” Hanley continued. “Transit is more than for transportation. It’s access to a job, a way to the doctor and better health, access to an education. It creates an opportunity for a better future for all.”

Hanley said doubling public transportation funding at $119 billion over the next six years would be paid through sound, progressive revenue streams. These would include phasing in a 15-cent per gallon gas tax increase, adopting the “Robin Hood Tax” which would impose a small tax on certain financial transactions, and developing a national infrastructure bank.

In addition, local transit agencies need more control of how they spend federal funds so they can avoid warehousing brand new buses while slashing service at the same time.

Expressing his concern about the perils of widespread outsourcing of public transit, which has lead to deteriorating service, fare hikes and system mismanagement, Hanley called for the rejection of federal policies that encourage private sector management of public transit systems. Tales of failed privatization have occurred in communities across the country including Nassau County; Savannah, GA; Fairfield, CA; San Diego, CA; and many other cities.

Passenger and operator safety has become a huge issue in transit, as a disturbing increase in violent attacks on drivers is placing everyone on and near buses at risk.  In addition, in too many cities, tight, computer-generated schedules and increased traffic congestion have created shifts in which no time is available to use the restroom, leading to highly distracted operators. Hanley called for common sense solutions to protect operators and passengers, alike.

Safety is also an issue on intercity buses, which have been involved in numerous fatal crashes in recent years as the culture of the industry has changed dramatically. Bus drivers are falling asleep at the wheel because they are working grueling hours at abysmally low wages. And since intercity bus drivers are exempt from the Fair Labor Standards Act’s (FLSA) overtime provisions, many are forced to work second jobs during their so-called “rest period” to make ends meet.

“It’s time to lift the overtime exemption for intercity bus drivers,” asserts Hanley. “Until we address driver fatigue and unscrupulous transit providers, we will continue to see carnage on our highways.”

Hanley called U.S. paratransit service, which serves people with disabilities and seniors, a disgrace, which must be addressed. “We must fulfill the promise of ADA and make an investment in the people who raised us. One day, we too will be in need of these services,” he said.

Good for the economy

“Investing in public transit is good for the economy, jobs, the environment and all aspects of our communities,” says Hanley, pointing to the fact that Americans overwhelming favor investment in transit, even supporting tax increases with more 70% of transit ballot measures passing since 2000.

“We need Congress to start thinking big when it comes to public transit, which when done well has been and continues to be a great ladder of opportunity for all,” Hanley concluded. “Let’s pass a bipartisan bill that enhances mobility for all of us.”

Permanent link to this article: https://carmensunion589.org/2014/01/president-hanley-testifies-before-congress/

Feb
18
Tue
all-day Union Meeting @ BTU Hall
Union Meeting @ BTU Hall
Feb 18 all-day
The regular meeting of the membership will be held on Tuesday, Feb. 18, 2020, at the Boston Teachers Union Hall (BTU), 180 Mount Vernon St., Dorchester, MA. The BTU is located behind the State Police Station near Columbia Rd. and Morrissey Blvd. It is also accessible by the Red Line. The regular order of business …