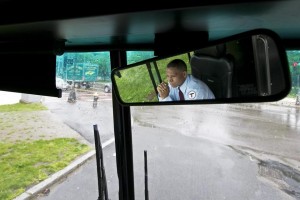 Miguel Goncalves is an easygoing guy — and in his line of work, he can’t afford not to be. Photo: YOON S. BYUN/GLOBE STAFF

MBTA bus driver Miguel Goncalves said he maintains an easygoing, respectful attitude with his passengers on Route 15 in Roxbury.

An MBTA bus driver for 11 years, he knows that every interaction with a rider is a conflict waiting to escalate. He knows that Route 15 is one of the problem routes, where customers tend to be particularly prickly. And he’s extra-careful to ensure that he doesn’t get into any trouble.

“You don’t want to add fuel to the fire,” he said from behind the wheel of the bus on Dudley Street. “It’s unfortunate, because we all just come to do our job.”

Assaults on MBTA bus drivers and T operators are on the rise: There have been 44 assaults so far this year, compared with 35 from this time last year, according to statistics from the MBTA. Each incident is shocking: There was the bus driver who was allegedly punched and kicked by teenagers. Another was choked by a man in Saugus, authorities said. Another was spat on by a woman holding a toddler.

In May, the T launched a campaign to discourage passengers from assaulting drivers, emphasizing that the offense will land them in handcuffs. Transit police have also begun to use DNA testing to identify passengers who spit on drivers.

In a May letter to T employees, MBTA General Manager Beverly A. Scott said she has become increasingly concerned about the safety of T employees. The campaign, she said, was meant to inform MBTA passengers that they would be prosecuted if they enact violence on a bus or train operator.

“Getting assaulted is not part of any T employee’s job,” Scott said.

But bus drivers like Goncalves know that information campaigns alone won’t protect them from becoming a statistic.

Goncalves pulled out of the Ruggles Station on a recent rainy afternoon. Drizzle, he knows, makes passengers grumpy. So he treats each person with a smile or maybe a thumbs up.

As the bus wound its way through prerush hour traffic, picking up passengers every couple of blocks, seats filled and even space in the aisles became tight. One man standing near the back of the bus, a sour expression on his face, called out as Goncalves opened the door for a few more passengers.

“Man, you can’t get nobody else on this bus!” the man yelled at Goncalves.

Goncalves ignored him. The man yelled again, louder and more forcefully, attracting concerned stares from other passengers: “You can’t get nobody else on this bus!”

Goncalves glanced into the mirror, apologized for the crowding, and continued to smile serenely. There’s nothing he can do, but he wants to make sure the man in the back remained calm.

“Sometimes, he behaves well, but there are off days,” Goncalves said. “We get some characters sometimes.”

Goncalves said he knows there are certain situations that often illicit an angry response. A passenger who accidentally misses his stop can grow irate very quickly, demanding to be let off the bus immediately. He’s not supposed to allow anyone disembark between designated bus stops, he said, but if a person is very angry, he will find a safe place to pull over. He’d rather just get the angry person off his bus before they hurt him or anyone else.

Goncalves, a Cape Verdean immigrant who lives in Brockton and has four children, said it’s hard to know why the number of assaults against bus drivers is increasing.

“Society’s changing, and people are more violent, I guess,” he said.

But he takes comfort in the fact that people seem to appreciate his friendly demeanor and even-keeled attitude.

“People like the way I treat them,” he said.

Most days, he enjoys his job and likes the people that he meets, he said. “I’m not driving around scared or anything like that,” he said.

He hears about assaults all the time, but he’s not fearful, he said. There are certain routes that bus drivers know will be more problematic, and he’s come to be more careful — 15 is one of them, as well as 1, 23, 44, and 45, Goncalves said. He said he feels the MBTA provides adequate training to help drivers respond to conflicts while keeping them from escalating.

Still, he said, every bus driver has an incident once in a while. His worst came six years ago, and began as a dispute over a fare — the most common cause of mistreatment from a passenger, he said.

It was late at night, and a burly man, clearly intoxicated, stepped onto the bus. He snapped a quarter in the slot, then continued walking onto the bus.

Goncalves shook his head. The fare is $2, he said.

“I guess that made him mad,” Goncalves recalled.

The man hawked a spitball, which landed squarely on the right side of his MBTA-issued jacket. Goncalves tried to keep his cool, and told the man he would call the transit police.

“Let me out of here,” the rider responded. Goncalves opened the door, and the man stumbled back out into the night.

Goncalves didn’t report the incident. It didn’t seem like such a big deal.

“I was fine, I just didn’t want to bother going through the paperwork,” he said.

Instead, Goncalves gingerly removed his jacket, folded it up and placed it behind his seat, finished his shift then took the jacket home, dropping it in the washing machine without any other clothes.

Make no mistake, he said, he was angry and offended. If it happened now, he said, he probably would report the spitting attack to his supervisors, so the T could perform DNA testing.

But when he thinks about what other drivers have experienced, the disrespect and bodily harm that they have endured, he knows his incident was not so bad.

He shrugged. “It could have been worse,” he said. “I was glad that it didn’t hit anywhere on my face or my body.”

His ability to slow his reaction, to keep from bursting out in rage, is part of what makes him a good bus driver, he says.

“All of us are different, and for some drivers, it’s so hard for them to remain calm,” he said. “You feel like you’re going to lose it, and you just have to say, ‘I’m a professional. I want to keep my job.’”

Permanent link to this article: https://carmensunion589.org/2013/07/serenity-on-route-15-bus-in-roxbury/