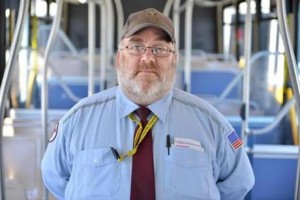 MBTA driver Kevin White said there was no temptation to take any of the $1,100 left on his bus.

The bank envelope sat alone on the Number 73 bus Monday afternoon, making the trip from Harvard Square in ­Cambridge to Cushing Square in Belmont.

A kindly passenger handed the envelope to Kevin White, who was at the wheel of the bus. White alerted the MBTA control center, which instructed him to hand it off to a supervisor in Waverly Square in ­Belmont.

White, 48, busy driving, did not peer inside the envelope ­until he arrived at Waverly Square. It is standard operating procedure to catalog contents of something left behind on a bus.

And that is when White discovered the contents: just over $1,100. Cash.

There was no temptation to take any of it, the driver said.

“I look at it this way: Somebody needed it for some reason,” said White, who has been driving for the MBTA for just over two years. “It could be their paycheck or their rent money. It’s not my money to ­decide that.”

White said the bus was about three-quarters full when the cash was found, and he had no idea who left it behind. He said people sometimes forget belongings when they rush to get off the bus, and that may have been the case Monday. The only other significant item he can remember being left ­behind on his bus before was a cellphone.

T spokesman Joe Pesaturo said the money was turned over to Transit Police, who worked with Cambridge Savings Bank to identify the owner. Tuesday morning, the Massachusetts Bay Transportation Authority issued a press release trying to get the word out that a significant amount of cash had been left on the bus.

The exact amount was not released at first because police wanted only the rightful owner to know how much there was, Pesaturo said.

After a brief search, the ­MBTA said Tuesday afternoon that Transit Police had identified the owner of the $1,100: a Watertown man, whose name had not been released Tuesday.

Brock Parker can be reached at brock.globe@gmail.com or on Twitter @brockparker2.

Permanent link to this article: https://carmensunion589.org/2013/05/cash-left-on-mbta-bus-is-returned-to-owner-passenger-driver-turn-in-1100/