Mayor Thomas M. Menino urged the state to avoid steep MBTA fare increases and service cuts, calling in a letter received yesterday by top state leaders for a gas tax or other increased levy to aid the T.

Hailing transit’s role in the region’s economy, environment, and quality of life, Menino said it would be a mistake to drive people away at a time of record ridership.

The T faces a $161 million deficit for the next budget year and carries more than $5 billion in debt, much of that used to pay for popular but unfunded MBTA expansion ordered by Beacon Hill.

That prompted the MBTA to propose raising the price of fares and passes an average of 35 percent to 43 percent while cutting numerous bus routes, scrapping ferry and weekend and late-night commuter rail service, and substantially raising discounted fares for students, seniors, and the disabled.

“I understand the difficult decisions facing the MBTA. Many administrations have simply passed the buck,’’ Menino wrote to state Secretary of Transportation Richard A. Davey, copying in the governor, Senate president, House speaker, and Boston lawmakers. “However, riders should not be forced to shoulder the entire weight of this debt.’’

Davey said he appreciated Menino’s letter and expected it, having spoken with him last week. But he said he has no expectation of receiving more money from the state.

“At this point, [we] are trying to offer solutions that are in our toolbox. Revenues from the state side do not seem to be forthcoming, in large part because there are significant budget pressures on the state as well,’’ Davey said. But Menino, he said, “knows the neighborhoods better than anyone in this city, and his perspective on how the cuts will affect our riders, our customers, and his constituents is extraordinarily valuable.’’

Menino acknowledged that riders might accept “modest fare increases’’ – the T last raised fares Jan. 1, 2007. But the mayor said he considers the proposals drastic, particularly hikes of 100 percent or more on fares for students and the elderly, and substantial changes to door-to-door service for the disabled, many of whom live on fixed incomes and rely on the MBTA to get around.

Faced with a choice between fare increases or service cuts, Menino said cuts should be avoided, given the lifeline that service represents. As an example, he cited threatened bus routes that carry hundreds daily to and from drug-treatment programs, homeless shelters, and other services on Long Island.

Meanwhile, ferries should be expanded, not cut, to encourage continued development along the waterfront from South Boston to East Boston, he wrote.

Calling current proposals a “one-year Band-Aid,’’ Menino wrote, “We are in desperate need of a dedicated revenue source’’ for the T. He offered help in discussing ideas while also asking that the T be relieved of Big Dig-related debt.

That debt – to pay for projects required for the state to proceed with the Big Dig and comply with federal environmental law – became the T’s burden in 2000.

Until then, the state annually made up the difference between MBTA expenses and the T’s fares, parking, and other income. But the Legislature enacted a program that made the T responsible for its budget, giving it a percentage of the state sales tax but also saddling it with debt.

The T cut staffing while adding service and wringing more money from advertising and real estate. But the sales tax has fallen short, some costs have soared (fuel, electricity, health insurance) and the debt has constrained the T’s budgets and its ability to invest in maintenance.

Patrick tried to raise the gas tax previously but lawmakers, instead raised the sales tax.

Patrick said recently that the state transportation system needs a permanent financing fix, though he has no immediate plan; Murray and DeLeo have said they will wait until MBTA public hearings conclude in March to weigh in.

He expects the T’s plans to evolve before they are enacted: “What I’ve heard from most customers is that if choosing between the two, folks would rather pay more than see service be cut.’’

But he said Menino is right that the problem is not going away. T debt payments will balloon in coming years, requiring even more cuts or fare increases without outside help.

“We do need a broader solution,’’ Davey said. “No doubt about it.’’

Eric Moskowitz can be reached at emoskowitz@globe.com.

Permanent link to this article: https://carmensunion589.org/2012/01/menino-urges-new-revenue-for-mbta/ 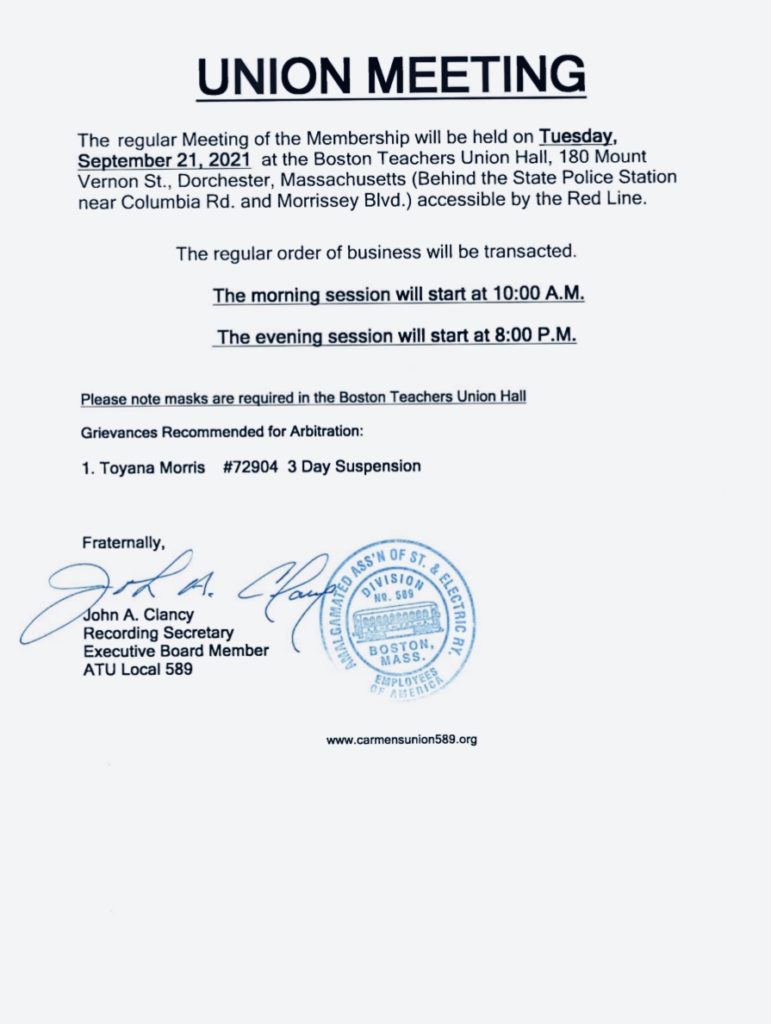 Click on the image above to let us know your payroll issue, regardless of whether or not your issue was resolved.